Kampala, 05th/May/2016; The Criminal Investigations Directorate (CIID) on May 4th 2016, interrogated Daily Monitor’s Associate Editor, Alex Atuhaire for about three hours over a news story published in the daily paper on April 5, about the mass killings in the Rwenzori sub-region, in Western Uganda. This was after the Defence Minister, Dr. Crispus Kiyonga reported a case of criminal defamation at the CIID, against the journalists.

Atuhaire was accompanied by the Daily Monitor Lawyer, James Nangwala and Company Secretary, Timothy Ntale. Nangwala told HRNJ-Uganda that Atuhaire appeared before Detective Henry Mbabazi who was under the overall supervision of Commissioner General Crimes, Venus Tumuhimbise at CID headquarters at Kibuli. “Police wanted to get information from him as Associate Editor because it believes he passed the story for publication. A plain statement was taken from him. He was released unconditionally.” Nangwala told HRNJ-Uganda at Kibuli.

Atuhaire is now the second journalist from Daily Monitor to be quizzed by CIID over the same story in less than a week after Yasiin Mugerwa –a senior political reporter who was released on bond and ordered to return to police after a fortnight.

The contentious story was published on April 5th , 2016 resulting from a press conference at Parliament on April 4th , 2016, covered by Yasiin, in which Members of Parliament from Kasese District came out and condemned what they called “a deliberate attack on Rwenzururu Kingdom palace”. The region has been the center of the recent violence in the Rwenzori sub-region, which saw at least 45 people dead.

HRNJ-Uganda has independently learnt that the two Daily Monitor journalists may be used to testify against the MPs in a defamation case that is likely to be brought against the MPs.

HRNJ-Uganda is deeply concerned that criminal defamation is widely used by the police to target journalists involved in writing investigative articles which are viewed to be critical by the authorities. Daily Monitor -which is viewed as critical by the authorities in Uganda has the biggest number of journalists who have been charged with defamation.

HRNJ-Uganda has since challenged the law in the East African Court of Justice in Arusha, Tanzania. The Court on 12th/November/2015 accepted David Kaye, the United Nations’ Special Rapporteur on the Promotion and Protection of the Right to Freedom of Opinion and Expression and Faith Dikeledi Pansy Tlakula of the African Commission on Human and People’s Rights’ Special Rapporteur on Freedom of Expression and Access to Information to be part of the case as friends of court.

Other local, regional, international organizations and bodies await the ruling of Court on whether they can join the case as friends of court.

“Since the campaign season last year, a number of journalists have been accused of ‘biased reporting’, ‘inciting violence’ by giving opposition candidates coverage. On Tuesday 3rd May, the police Chief, General Kale Kayihura threatened to arrest journalists giving coverage to members of the opposition whose political activities have been ruled out as illegal. We believe that police is out to criminalise the work of journalists and media houses, which actions are arbitrary and unacceptable.” Said the HRNJ-Uganda National Coordinator. 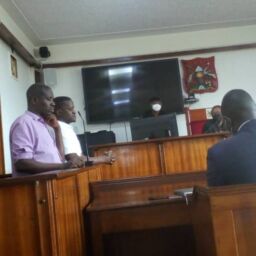 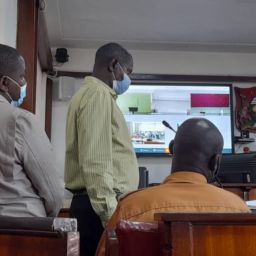 Bushenyi, 24th April 2015; Zadock Amanyisa, a Daily Monitor correspondent based in Bushenyi was on 22nd April incarcerated and charged… 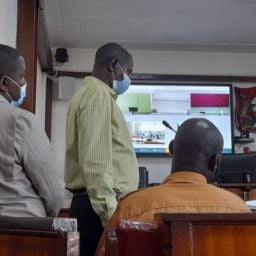 0 0
15 Sep 2016
Journalists charged with criminal defamation, remanded to prison for declining to implicate their source (Demo)